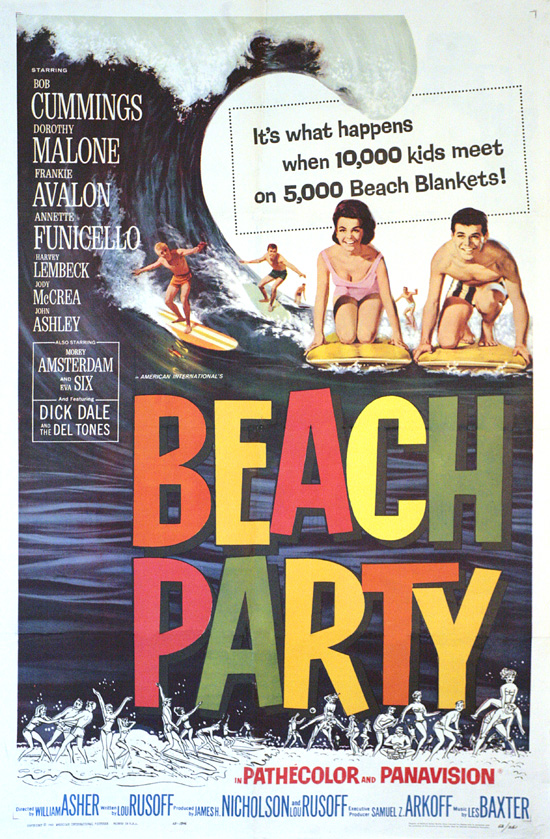 This initial cinematic pairing of Frankie Avalon and Annette Funicello was such a huge hit for American International that it spawned several sequels, spin-offs and imitations from the major studios. Life was easy and problems were relatively trivial for the AIP beach party gang, who sang, danced, surfed, and chased each other around sunny Malibu beaches.

In “Beach Party”, Frankie’s big plans to “be alone” with Dolores (Annette) are spoiled when she invites the couple’s entire gang of friends to stay in their rented beach house. Frankie decides he’ll get even with her by turning his affections where they’re appreciated, toward blonde bombshell Ava (Eva Six), a waitress at the local beatnik hangout, Big Daddy’s.

Professor R.O. Sutwell (Bob Cummings), famed anthropologist, finds the local surfing culture and mating rituals fascinating, and plans to write a book about it — with the snappy title “The Behavior Pattern of the Young Adult and it’s Relation to Primitive Tribes”. Sutwell moves in next door to the surfers, watches the kids through a telescope, and secretly records their conversations!

The sworn enemies of the surfers, a biker gang called the Ratz & Mice, led by cartoonish bad-guy Eric Von Zipper (Harvey Lembeck), show up at Big Daddy’s to hassle the kids. Sutwell rescues Dolores from Von Zipper by placing him in a state of suspended animation. Sutwell’s “Himalayan Time Suspension Technique” is given several different names (“The Rat’s Revenge”, “The Cycler’s Curse”) but stays a running gag throughout the series.

Dolores agrees to help Sutwell with his research by trying (unsuccessfully) to assimilate him into the group. The surfers think of Sutwell as a dirty old man and give him a hard time. At one point they even set his hat on fire, but their nastiness goes mostly unnoticed by the square, naive Professor. All the attention Dolores is paying to Sutwell begins to go to his head, but luckily his lovely assistant, Marianne (Dorothy Malone), is there to reel him back in.

The kids are angered when they discover Sutwell has been secretly studying them. Fortunately, they’re able to work things out right before Von Zipper returns with an army to teach Sutwell and those rotten surfers a lesson. A bar-room brawl begins, inexplicably morphing into a pie fight. In the end, Frankie gets back together with Dolores, and a sequel is hinted at. Followed by “Muscle Beach Party”.