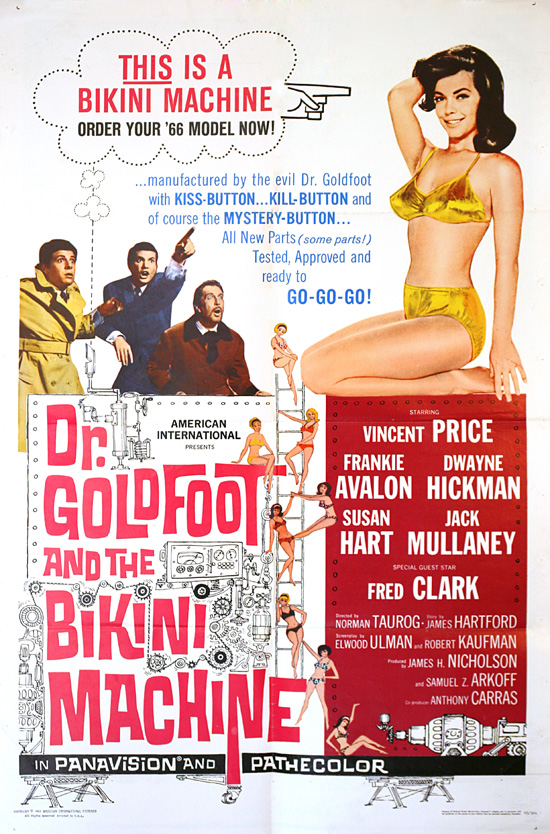 Mad scientist, Dr. Goldfoot (Vincent Price), uses the secret laboratory underneath his funeral home to create bikini-clad robots. Aided by his bumbling sidekick, Igor (Jack Mullaney), Goldfoot then uses the robots to seduce unsuspecting millionaires so he can gain control of their wealth. Beautiful Susan Hart plays (Robot) Number 11, who is created specifically to marry wealthy bachelor, Todd Armstrong (Dwayne Hickman). When Number 11 mistakes Secret Agent, Craig Gamble (Frankie Avalon), for Armstrong, she attracts the attention of Secret Intelligence Command (SIC), the spy agency Gamble works for. Armstrong and Gamble team up to take down Goldfoot but walk right into a trap. Price gets to reprise his role in “The Pit and the Pendulum” before Armstrong and Gamble escape which leads to a chase through the streets of San Francisco.

“Dr. Goldfoot and the Bikini Machine” is dumb fun that remains one of the better AIP beach party offshoots. The sequel, on the other hand, is so bad you’ll need a shower afterward.

Followed by “Dr. Goldfoot and the Girl Bombs”