alternate titles: “Le Spie Vengono dal Semifreddo (The Spy Who Came in From the Semi-Cold” 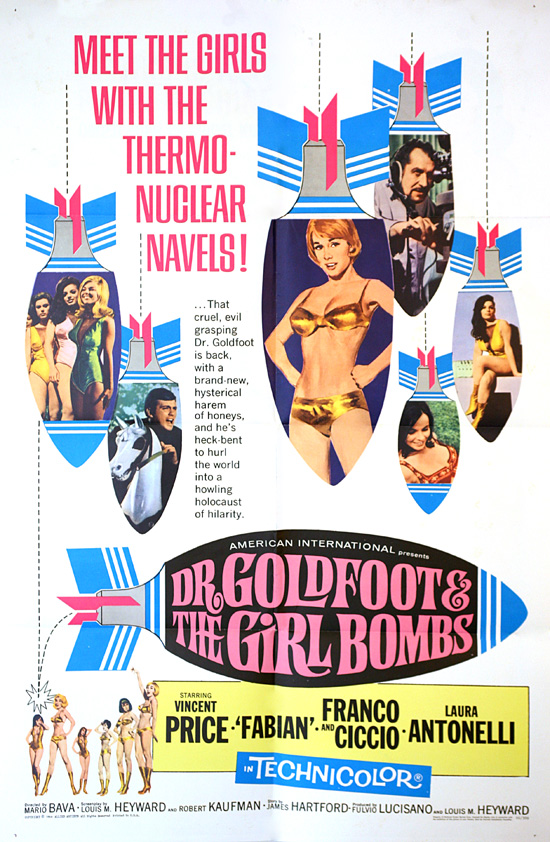 Horror director, Mario Bava, directed this unwatchable sequel to “Dr. Goldfoot and the Bikini Machine”. It was his first and last comedy. The plot revolves around Dr. Goldfoot (Vincent Price) creating robot girls that blow up when they get close enough to NATO Generals. Fabian plays Bill Dexter, an agent for Secret Intelligence Command, and a bland replacement for Frankie Avalon’s character in the first one. He teams up with the beautiful Laura Antonelli, and Franco and Ciccio, the lamest, most unfunny comedy team ever, to foil Dr. Goldfoot’s schemes. They succeed, but not before an extra long, extra dumb chase sequence.

Mostly, “Dr. Goldfoot and the Girl Bombs” is a dull experience, but when it tries to be funny is when it really stinks. After filming, the soundtrack was misplaced and the actors had to return to record their dialogue again, so the entire movie looks out of sync. The Sloopys screech the obnoxious theme song over the end credits. The Italian title translates to “The Spy Who Came in From the Semi-Cold”. A truly miserable experience.

Watch it on Hulu