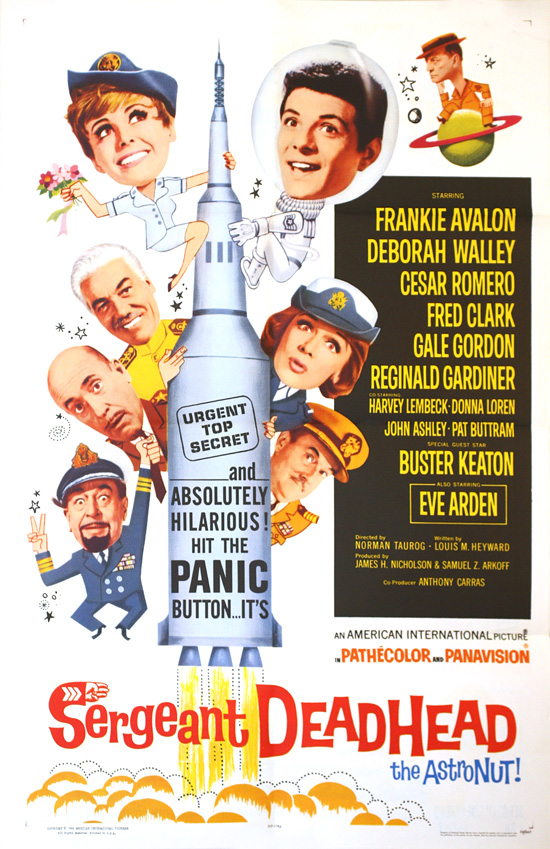 This “Beach Party” offshoot is neither fun nor funny. It’s difficult to find a copy as it’s never been available on VHS or DVD, but trust me, don’t waste your time looking for it.

Top military brass (played by Cesar Romero, Gale Gordon and Reginald Gardiner) visit Smedley Missile Center to oversee General Fogg’s (Fred Clark) mission to shoot a chimp into orbit. Quiet, cowardly Sgt. O.K. Deadhead (Frankie Avalon) tries unsuccessfully to light off a bottle rocket on the parade grounds and is thrown into the guardhouse. Deadhead’s bumbling often lands him in the guardhouse and as a result has postponed his wedding to the lovely Airman Lucy Turner (Deborah Walley) three times now.

When his bullying cell-mate (Harvey Lembeck) forces Deadhead to escape with him, Deadhead hides out in the rocket with the space-chimp. Of course, the rocket launches and he inadvertently becomes an astronaut. The top brass decide to play up Deadhead as an American hero and arrange for him to marry Lucy when he arrives back home. Why? I’m not really sure. But when Deadhead returns he’s become a cocky, skirt-chasing maniac. His newfound arrogance upsets the military brass so they throw him back into the guardhouse and arrange for a look-alike to take his place. The real Deadhead escapes again and with two Deadheads running around hilarity (not worth writing about) ensues. “Sergeant Deadhead” easily rivals “Dr. Goldfoot and the Girl Bombs” for the title of worst beach movie and probably isn’t worth 89 minutes of your time.