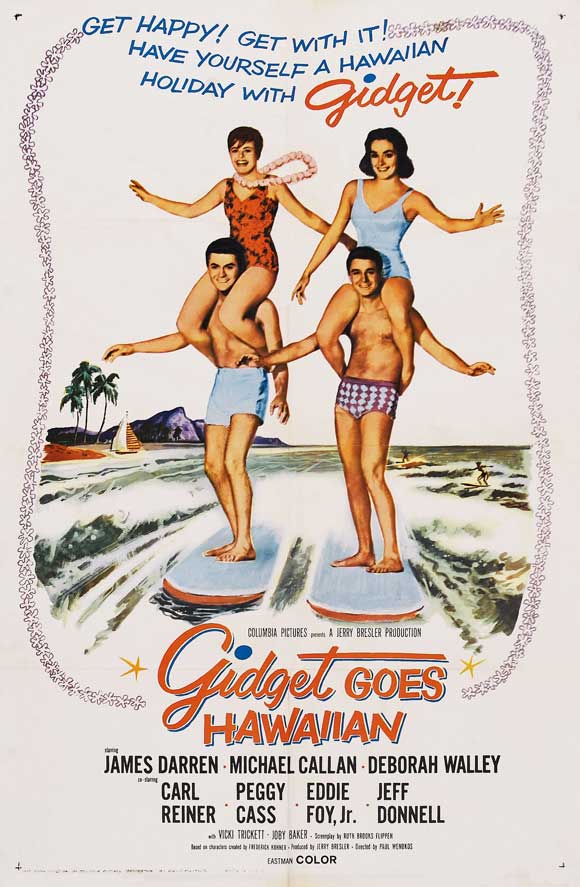 Gidget (this time played by Deborah Walley) gets upset with her parents when they spring a surprise vacation to Hawaii on her during the short time Moondoggie (James Darren) is home from college. Gidget becomes even more upset when Moondoggie doesn’t apparently share her frustration about the trip. The two kids break up and Gidget vows to never love again. On the plane, Gidget shares her misery with Abby Stewart (Vicki Trickett) a boy-crazy girl Gidget’s age. Abby sets her sites on Eddie Horner (Michael Callan), a famous dancer on his way to Hawaii to perform.

In Hawaii, Gidget’s sulking worries her father (Carl Reiner) so he sends a telegram to Moondoggie, requesting he meet them in Hawaii. At the same time Gidget decides that although she may never be truly happy again there’s no reason to mope around and worry her parents. Her presence in the social scene is an instant hit. All the boys, including Eddie Horner are impressed with her ability to dance, surf, and water-ski. Moondoggie shows up just in time to catch Gidget in the arms of Eddie. Abby quickly latches onto Moondoggie but can tell who he’s really interested in. Tired of Gidget stealing all attention away from her, Abby spreads a rumor that Gidget is a “fallen woman who’s had an unfortunate experience”. Nobody really believes it though and Abby gets tossed into the ocean as part of her comeuppance.

The movie ends with a tacked-on subplot involving Gidget thinking her parents are being unfaithful to each other and Gidget covering for them. It seems a little out of place. Followed by “Gidget Goes to Rome”