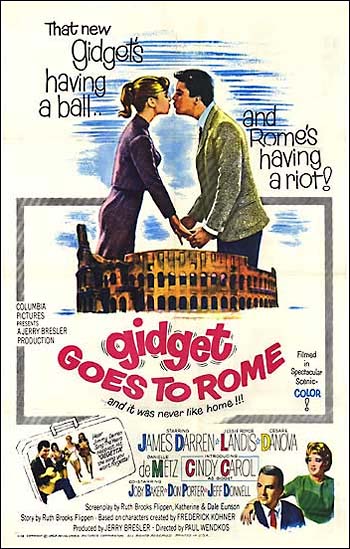 I don’t know what genius thought Gidget had to “go” places. She was much more fun when she stayed in Malibu and hung out at the beach. Unfortunately, only the first ten minutes of this 101 minute movie take place at the beach. Then Gidget, Moondoggie, and all their friends are off to Rome for lots of boring sightseeing.

Gidget (this time played by Cindy Carol) and Moondoggie (played for one final time by James Darren) have absolutely zero chemistry together. When Moondoggie flips for their beautiful Italian tour-guide, Daniela (Danielle De Metz), he breaks up with Gidget. It isn’t until Daniela rejects him that he decides to get back together with Gidget. Romantic stuff, huh?

Meanwhile, Gidget is spending her time being wined and dined by a handsome Italian gentleman named Paolo Cellini (Cesare Danova), who claims to be writing a magazine article about her. She doesn’t find this at all suspicious. Paolo is actually an old war buddy of her father’s who has agreed to secretly keep an eye on Gidget for the summer.

This was the last theatrical Gidget movie and was released on the same day as AIP’s “Beach Party”. Gidget would move to television with two different TV series (“Gidget” (1965) and “The New Gidget” (1986)) and and three TV movies (“Gidget Grows Up” (1969), “Gidget Gets Married”, and “Gidget’s Summer Reunion” (1985)). Don Porter, who plays Gidget’s father in “Gidget Goes to Rome” would go on to play her father on the first TV series.