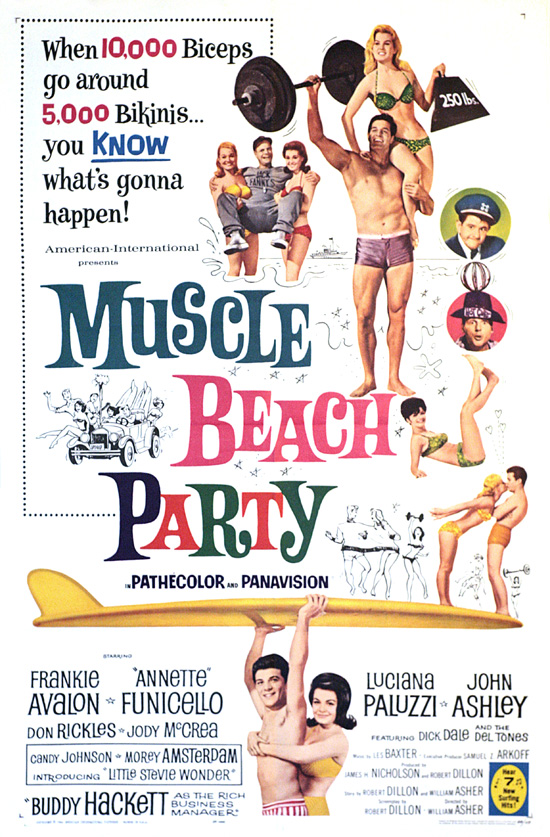 AIP knew they were on to something after the financial success of “Beach Party” and wasted no time producing a sequel. “Muscle Beach Party” hit theaters less than nine months after the release of it’s predecessor. Frankie, Dee Dee (Annette. Her name was changed from Dolores to Dee Dee in this one) and most of the original cast return, as well as some welcome new faces. The problems are the same; Dee Dee wants Frankie to seriously think about settling down but he wants no part of it. He likes his life the way it is – with no strings attached.

The gang heads back to the beach for Easter vacation to find the house next door has been rented to a string of musclemen and their know-nothing trainer, Jack Fanny (amusingly played by Don Rickles). Beautiful Luciana Paluzzi (from “Thunderball”) plays Julie, a wealthy widowed Contessa who has fallen in love with the biggest, handsomest muscle man, Flex Martian (Peter Lupus from “Mission Impossible”, billed as Rock Stevens), after seeing him on the cover of a muscle magazine. Incidentally, the muscle magazine is called “Muscle Magazine”. After tracking Flex to the beach, Julie’s business manager, S.Z. (Buddy Hackett), begins negotiations to buy Flex’s contract from Jack Fanny so Julie can whisk Flex away on her yacht.

Julie falls out of love with Flex as quickly as she fell in when she comes upon Frankie singing to himself on a lonely moonlit beach. She promises him a big recording contract and the world on a string. Frankie goes along with it for a while but realizes that it’s Dee Dee he wants to be with.

Flex Martian, feelings hurt, gathers the other muscle men to beat the tar out of the surfers. A big, cartoony brawl breaks out, not unlike the one at the end of “Beach Party”. You’d think the muscle-men could easily stomp the beach kids, but the fight is pretty evenly matched. It takes Peter Lorre, in the second to last role before his death to show up and break up the fight. Followed by “Bikini Beach”