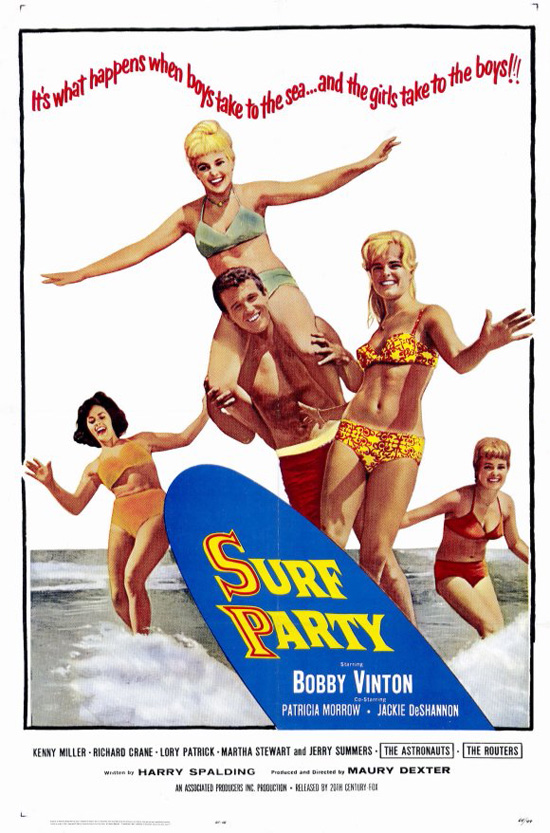 “Surf Party” was the first beach movie by a major studio to try and cash in on the success of AIP’s “Beach Party”. It isn’t half bad although it was shot in black and white and the plot resembles more of a fifties juvenile delinquent movie than it does a fun sixties beach movie.

Terry Wells (Patricia Morrow) and her two friends Junior (Jackie DeShannon) and Sylvia (Lory Patrick) travel from Arizona to California in hopes of finding Terry’s brother Skeet (Jerry Summers). They quickly befriend Len Marshal (Bobby Vinton), the owner of the local surf shop who agrees to give them surfing lessons.

Richard Crane plays the jerky police Sergeant Neal who has his nose bent out of shape about a gang of surfers called “The Lodge” causing trouble in the area. He skulks onto the screen every once in awhile to harass the characters and remind Len that if “The Lodge” doesn’t clean up their act, the beach will be closed to surfing and his surf shop will be out of business.

When Terry finds her brother she learns that he’s a big shot in the area and leader of “The Lodge”. He lives in a nice pad overlooking the beach where kids come over to dance to the tunes of The Astronauts and The Routers. Kenny Miller, who looks at least ten years older than the other players in the film, tries to join “The Lodge” by “running the pier” (surfing in between the pylons holding up the pier) and ends up breaking his collar bone. When Skeet’s sugar mama returns unexpectedly to her beach house on a night Skeet is throwing a party she causes a big scene and belittles Skeet in front of all his friends. The movie ends rather abruptly when an embarrassed Skeet is driven to the bus station the next day by the cranky Sergeant Neal.