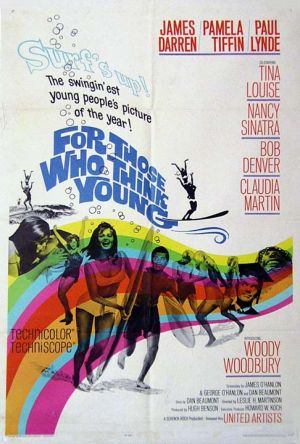 “For Those Who Think Young”, for those who don’t know, was the slogan of Pepsi-Cola. Out-of-touch executives at United Artists thought it would be a good title for their attempt at a beach movie.

James Darren plays a rich kid whose grandfather owns most of Oceancrest College, where Darren is a student. All the girls there throw themselves at him but the only girl he wants is Pamela Tiffin, and I don’t blame him. However, Tiffin is the only girl that doesn’t seem to like him very much. Her uncles, played by Paul Lynde and Woody Woodbury, work in town as a struggling nightclub duo. Woodbury becomes a huge hit to the town’s college kids when he dumps Lynde from the act and starts telling hacky jokes (mostly about being drunk). Darren’s grandfather, who doesn’t approve of his grandson’s relationship with Tiffin, sets out to ruin her uncles and close down the nightclub where they work. The movie is at it’s best when the kids are at the beach surfing, dancing and just hanging out. Unfortunately there are only a couple of these scenes while Woodbury’s lame nightclub act is given far too much screen time.

Fellow castaways Bob Denver and Tina Louise also star, as well as Nancy Sinatra, Claudia Martin and a bevy of kids from the AIP beach movies.