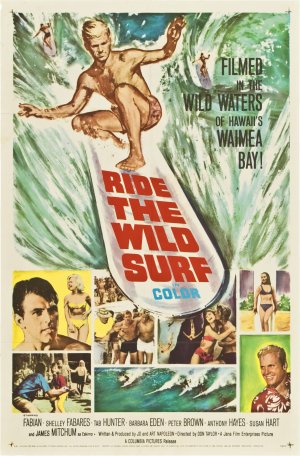 Three friends from Malibu including Fabian (as Jody), Tab Hunter (as Steamer) and Peter Brown (as Chase) travel to Hawaii to check out the legendary surf scene. While there, they get girlfriends, antagonize some local hotshots (James Mitchum, John Anthony Hayes and Roger Davis), and overcome some personal failings.

Jody has never been able to commit to anything, including college. After nagging him a couple times, Brie (Shelley Fabares) convinces him to return to school when he gets back to the mainland. Later Jody has his confidence rattled when he wipes out surfing but in the end regains it in time to win a surf competition at Waimea Beach. Steamer falls in love with Lily (Susan Hart), a beautiful native girl whose over-protective mother (Catherine McLeod) forbids her daughter to have anything to do with those irresponsible surfers (based on her own experience with them). Chase, with the help of free-spirited Augie (Barbara Eden), learns to overcome his square, conservative nature by drinking too much and diving off a dangerous waterfall.

“Ride the Wild Surf” is often thought of as “the good beach movie” but personally I think that’s a stretch. There’s a lot of beautiful Hawaiian scenery and Shelley Fabares looks great as a blonde, but it’s often too serious, too melodramatic and the non-surfing scenes are pretty uninteresting.