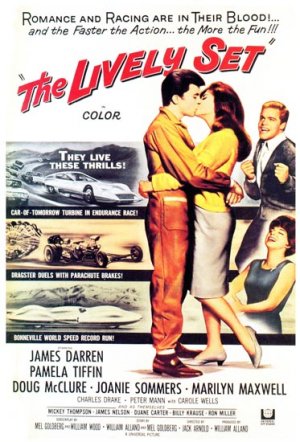 “The Lively Set” starts out with a swinging theme song by James Darren and an exciting hot rod race between Darren and Doug McClure. But what starts out as a promising movie, quickly devolves into the tedious tale of James Darren as an engineering student who drops out of college to work on a car with a turbine engine. McClure’s sister, played by the gorgeous Pamela Tiffen, has eyes for Darren but all he thinks about is cars… until one afternoon when she drains his fuel line in the park. The final cross-country race has some thrills but it’s a real chore to get there.

Greg Morris (Barney from “Mission: Impossible”) plays a CHP officer. Director Jack Arnold fared better in the fifties with sci-fi hits like “Creature From the Black Lagoon” and “It Came From Outer Space”.