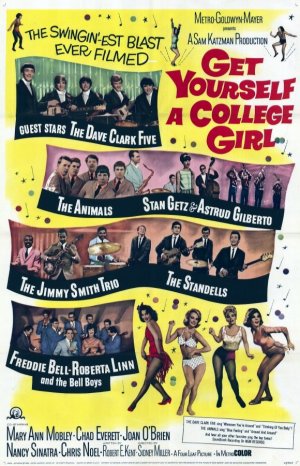 Four of Elvis Presley’s female costars (Mary Ann Mobley from “Harum Scarum”, Joan O’Brien from “It Happened at the World’s Fair”, Chris Noel from “Girl Happy”, and Nancy Sinatra from “Speedway”) star in this music showcase. The plot takes up about 25% of the film and serves merely as a filler between musical acts (in fact, the featured bands get top billing over the stars during the title sequence!) but is still strangely watchable, due in big part to some pretty winter scenery.

Terry Taylor (Mobley) has been paying her college tuition by secretly writing and recording racy, feminist songs under the pseudonym, Joanie Harper. When her music publisher, Gary Underwood (Chad Everett), inadvertently blows her cover with the old fogies that run the college, Terry risks being thrown out of school after Christmas break. The girls all head to Sun Valley for some skiing and meet Senator Hubert Morrison (Willard Waterman) who fears he won’t be re-elected if he loses the youth vote. The senator also happens to be on the board of trustees at the college and will help Terry from being thrown out if the girls are willing to help him connect with young people. It’s not a sordid as it sounds.

Meanwhile, Gary has followed Terry to Sun Valley in hopes of getting her to pose for the painting that will be featured on her album cover. Terry, still furious she may be kicked out of college because of Gary’s meddling, promises to sue him and swears off men altogether. Terry’s rage quickly dies and she and Gary fall in love faster than any other couple in movie history. Also, because of his open-mindedness, Senator Morrison, wins his re-election bid. Why the elections are taking place in December remains unclear.

The waitress trying to snap a picture of Terry at the dance appears in most of Sam Katzman’s productions… probably because she was his wife.