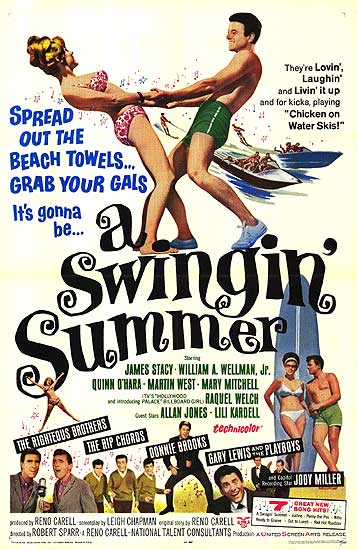 Mickey (James Stacy), who has too much personality and Rick (William Wellman Jr.), who has no personality at all, along with Rick’s girlfriend, Cindy (Quinn O’Hara) head to Lake Arrowhead, Calif. to spend the summer working at a dance pavilion. The kids are disappointed when they get there and find the dances have been cancelled. They try to convince the resort owner to let them take over the pavilion for the summer but he refuses until Cindy secretly arranges to subsidize the dances with her bigwig father’s cash.

A couple of belligerent lifeguards, Turk (Martin West) and Tony (Robert Blair) show up to antagonize Mickey and Rick. Turk steals Cindy away from Rick for a while after she gets annoyed with Rick for working too much. Rick and Turk duke it out at a barbecue and Cindy gets back together with Rick after he wins the fight. Tony has a problem with Mickey for some unexplained reason and challenges him to a chicken run on water skis! Exciting, right? It isn’t.

Meanwhile, a humiliated Turk hires a pack of thugs to make trouble at the pavilion. The ineffectual goon squad doesn’t even make it past the front door and instead get beaten up by Rick and Mickey. The goons find Turk the next day and muscle him into helping them steal the money earned at the pavilion the night before.

This forgettable movie ends with a boat chase, yet another fight, and a song by The Righteous Brothers. Most of the same cast was back together in “Winter A-Go-Go” six months later, which was practically a remake, but far more entertaining.