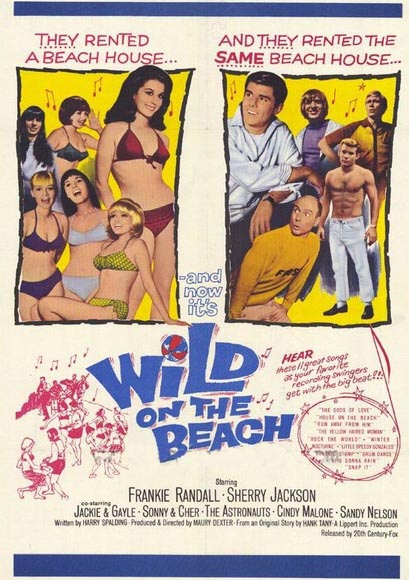 A pointless, black and white “beach” movie that spends 99% of its time indoors. Every once in awhile the lovely Sherry Jackson will gaze out the window to watch the surf roll in and remind the viewer they are indeed watching a beach movie.

Adam Miller (Frankie Randall) is a college student that lives in a beach house owned by a family friend of his. When that family friend dies, he leaves the house to his niece, Lee Sullivan (Sherry Jackson). Lee plans on living there while she’s in school and renting out the rooms to other girls from the college. When she arrives at the beach house to find Adam and his buddies living there she unsuccessfully tries to throw them out. Adam tells her that until she can produce the deed to the house, he has just as much right to be there as she does. Adam and Lee agree to split the house down the middle for the time being.

Apparently if you went to college in the sixties and lived off-campus, the school had to inspect and approve of your living quarters. It seems pretty ludicrous but is a major plot component of “Wild on the Beach”. The school issues a temporary permit for Adam and other males to live off-campus at the beach house after Adam gets to the permit office first. When Lee shows up later for a permit at the same house, the Dean (Booth Colman) senses that there is some “hanky panky” going on. The Dean, who has nothing better to do, and his goofy assistant Mr. Terwilliger (Justin Smith) set out to catch the girls and boys living under the same roof. The invasions of privacy are quite shocking as the dean goes through closets and dresser drawers and even breaks into the house next door. Instead of a real resolution, the Dean is suddenly called away by the Air Force Reserves, bring the conflict to an end.