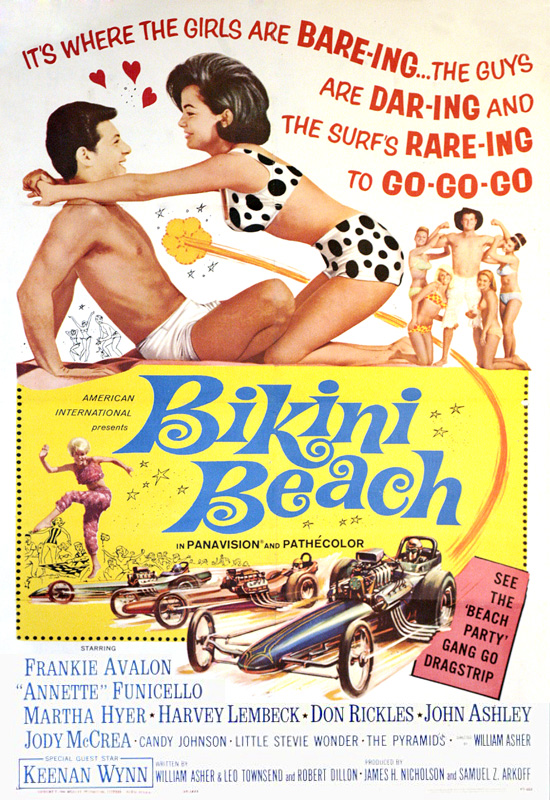 The “Beach Party” gang goes drag-strip when drag-racer and British pop superstar, The Potato Bug (Frankie Avalon in a dual role), sets up camp on the beach. The Potato Bug takes an instant liking to Dee Dee and is challenged to a race by a jealous Frankie. Don Rickles plays Big Drag, the owner of the drag strip, who loans Frankie a “rail” under the assumption that lots of people will pay admission for a grudge race.

Meanwhile, newspaper publisher Harvey Huntington Honeywagon III (Keenan Wynn) wants to expand his old folks home, Sea-Esta by the Sea, but can’t until those darn surfers are chased off. He sets out on a quest to prove that his (guy in a) monkey (costume), Clyde (Janos Prohaska), is on the same intellectual wavelength as the surfers. His attack pieces in the newspaper attract the attention of school teacher Miss Vivien Clements (Martha Hyer), who knows the surfers and intends to change Harvey’s mind about them. Honeywagon’s articles are also noticed by Eric Von Zipper, who was sadly missing from “Muscle Beach Party” Von Zipper and his rat pack vow to help Honeywagon, even though Honeywagon is repulsed by the bikers and wants nothing to do with them.

Honeywagon never really has a direct change of heart regarding the surfers, but does realize he’d rather get it on with Miss Clements than have his old folks home expanded. Honeywagon prints a series of retractions to his anti-surfer hit pieces. Feeling frustrated and betrayed, Von Zipper sabotages Frankie’s dragster the night before the big race. Frankie crashes, but walks away from the wreck unharmed. Von Zipper is revealed as the culprit, giving way to a silly chase and the obligatory surfers vs. bikers brawl. Followed by “Pajama Party”