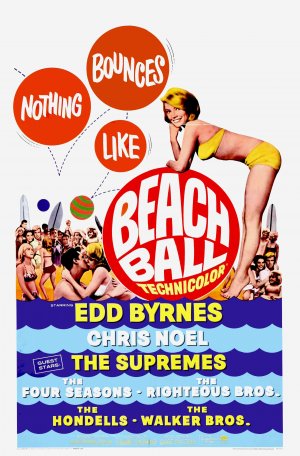 A fun, silly beach movie that throws in everything (surfing, music, skydiving, skindiving, hot rods, race cars, you name it) but the kitchen sink and still manages to run just over eighty minutes. Dick Martin (Edd Byrnes) and his buddies have dropped out of college to focus on their musical group, The Wigglers (unsarcastically, one of the best band names ever). The guys find themselves in desperate need of $1000 quickly in order to keep the musical instruments they obtained on credit but haven’t made any payments toward.

Dick returns to school to con the loan department out of the money they need. He lays it on thick and tells uptight, Susan Collins (Chris Noel), who I noticed is always named Susan in these movies), who heads the loan department, that if he doesn’t get the money ASAP, he and the other Wigglers won’t be able to finish school. Susan is so touched by Dick’s lie that she decides to bring the money over to his beach house personally, only to find a wild party instead of the four studious gentlemen she was expecting. Susan realizes she’s been had and tears up the check. Later though, Susan and her three friends decide “The Wigglers” are on the road to ruin and make it their mission to get the boys to return to school. The girls let down their hair, take off their glasses, and put on some bikinis to seduce the boys. The four boys hit it off with the four girls and together are able to keep Bernard Wolf (James Wellman), who wants his money or his instruments back, distracted long enough for the band to enter a big musical talent contest. After a goofy chase scene where The Wigglers have to dress up as (extremely ugly) girls to shake the police, the band makes it to the stage at the last minute to win the contest. I think they agree to go back to school too, I can’t remember.