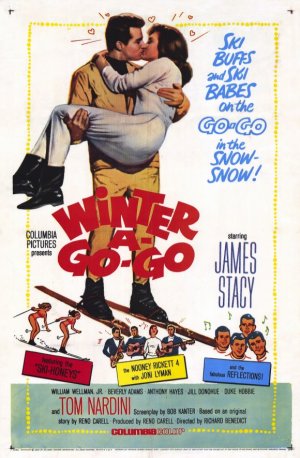 See a daring chicken run on skis! Wait a second, wasn’t there a daring chicken run on water skis in “A Swingin’ Summer”? Come to think of it, the same producers and virtually the same cast were responsible for “A Swingin’ Summer”, although this one is slightly more watchable. Instead of managing a music pavilion for the summer, Danny Frazer (James Stacy) and Jeff Forrester (William Wellman Jr.) manage a ski resort. Some bad guys show up (and you can tell they’re bad guys because they wear all black) to cause trouble so the lodge will go out of business and Danny and Jeff will have to sell their investment. There’s lots of skiing, bad ski-related music and a romance between Jeff and Jo (Beverly Adams) that never seems to get off the ground… which makes the fact that they get married at the end seem like it’s totally out of left field.