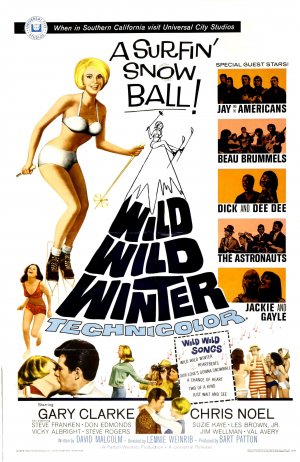 The boys at Alpine College are all frustrated that the girls in the Theta Zeta sorority won’t date them. It seems the Theta Zeta’s leader, Susan Benchley (Chris Noel), has convinced the girls that all men are dogs with one thing on their minds… and it isn’t marriage. The desperate boys attempt to break Susan’s grip on the girls by recruiting Malibu surfing instructor, Ronnie Duke (Gary Clarke), whose technique with women is legendary. Ronnie enlists at Alpine in order to seduce Susan and ultimately make a hypocrite of her. Susan, who works in the dean’s office, thinks Ronnie is the son of a millionaire pineapple magnate due to Ronnie’s paper application to the school. Ronnie tells Susan he’s tired of people treating him like he’s privileged and wants to change his application to say that he’s just a poor surf bum. Susan understands his problem and feels honored she’s the only person to know his secret. Susan falls in love with Ronnie, of course, when she begins giving him private ski lessons. And Ronnie falls in love with Susan and, of course, feels bad about his deception. There’s a big misunderstanding that gets worked out in the end, not to mention some gangsters that own the mortgage on the school, an intercollegiate ski race, and bear that goes berserk when it sees a bear skin rug. This is probably the best beach movie that wasn’t made by AIP.