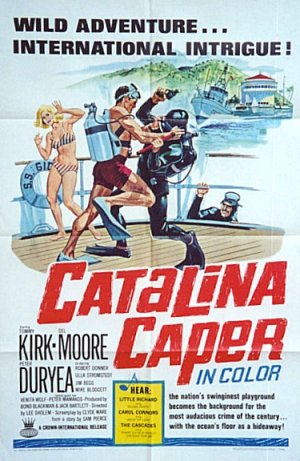 Don Pringle (Tommy Kirk) heads to Catalina island for summer vacation. Although there’s no shortage of girls on the island, Don sets his sites on Katrina (Ulla Stromstedt) a strange, exotic looking girl he meets on the ferry ride over. Unfortunately Katrina is spoken for by a goon named Angelo (Lyle Waggoner) who is on the island doing a secret job for a Greek tycoon named Lakopolous (Lee Deane).

Meanwhile, the Duvals (Del Moore and Sue Casey) lounge around on a borrowed yacht anchored off Catalina all day. They’ve stolen a valuable ancient scroll from an L.A. museum and intend to copy it so they can sell the forgery to Lakopolous. When a mishap causes the scroll to fall overboard, Mr. Duval puts together an underwater scavenger hunt for the beach kids with a $100 prize going to the diver who retrieves the scroll.

Some bad guys, including Angelo, show up at the scuba party to recover the scroll, but Don finds it first and holds onto it. Don essentially dangles the scroll in front of Angelo the next day at a cafe. When Angelo pulls a knife on Don, Katrina realizes what a bad guy Angelo really is. There’s a short chase before the scroll is returned to the museum.

Catalina Caper is probably better known than it should be because of the Mystery Science Theater 3000 treatment it received. Without the commentary of Joel and the bots however, it’s a pretty boring experience. The movie was made in 1965 but wasn’t released until 1967 due to money issues. There is some nice photography courtesy of Ted V. Mikels but overall Catalina Caper is a real snooze.