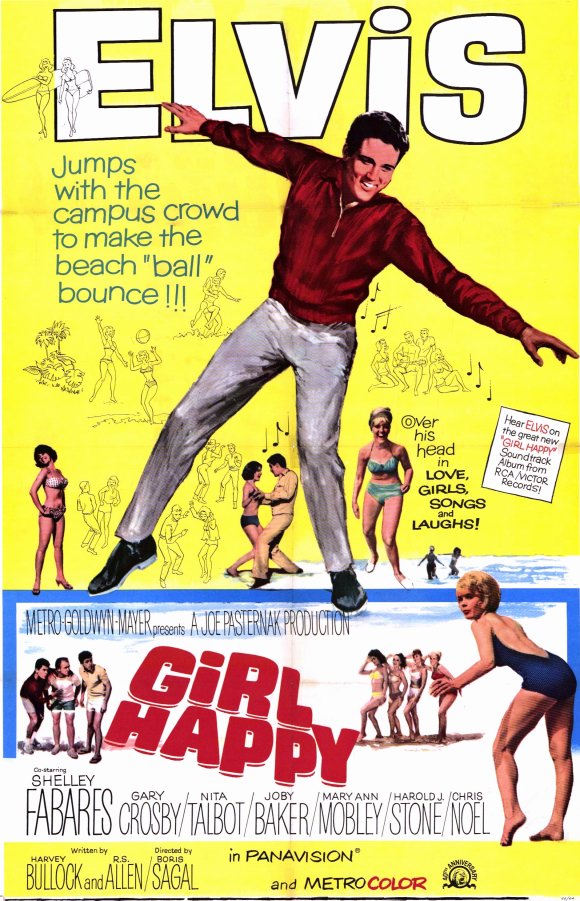 Rusty Wells (Elvis Presley) and his combo (Gary Crosby, Joby Baker and Jimmy Hawkins) are tasked by their employer, a Chicago gangster named Big Frank (Harold J. Stone), to secretly chaperone Big Frank’s daughter, Valerie (Shelley Fabares) during her Spring Break in Fort Lauderdale. Rusty tries making time with the a lovely co-ed named Deena (Mary Ann Mobley) but is constantly getting called away on Valerie-related emergencies. As Rusty spends more time with Valerie he begins to fall for her. When Big Frank reveals that he’s been paying Rusty to keep an eye on her, Val decides to make Rusty really work for his money and goes out with Italian playboy Romano (Fabrizio Mioni). Valerie gets too drunk at a strip club and causes a riot that lands her in jail. A furious Big Frank bails Valerie out and after talking to her realizes that Rusty may have really fallen for his daughter. The couple are reunited for a happy ending.

“Girl Happy” is one of the better Elvis Presley vehicles even if most of the songs aren’t the greatest. The story is fun and the sets are visually pleasing. Mary Ann Mobley, Chris Noel and Fabrizio Mioni were all in “Get Yourself A College Girl” for MGM the previous year. If the Fort Lauderdale nightclub set looks familiar, it’s because that was recycled from “Get Yourself A College Girl” too.