The Misadventures of Merlin Jones | 1964 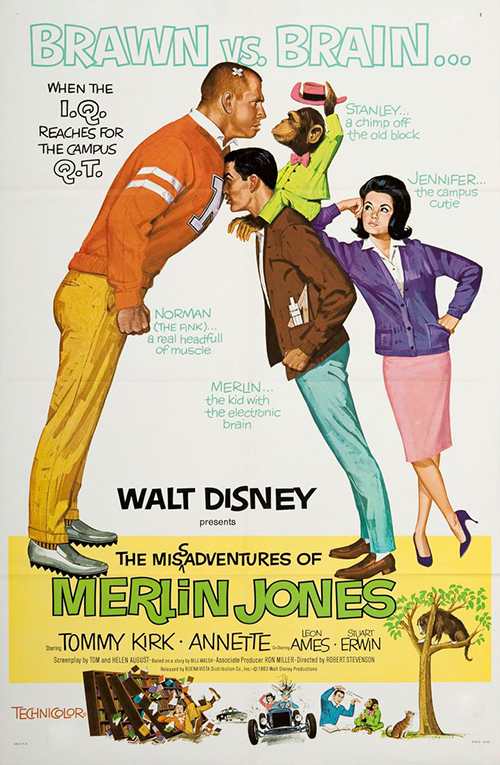 “The Misadventures of Merlin Jones” isn’t really a beach movie, but because of the cast and time period in which it was made, I decided to include it anyway. Watching this movie and it’s sequel “The Monkey’s Uncle”, felt like watching four episodes of a TV show edited into two full-length movies. In both cases, halfway through the film, the main conflict is completely resolved and a new plot begins for the remaining half.

Tommy Kirk plays Merlin Jones, the campus science genius at Midvale College. Annette (she’s just billed as Annette) plays his tagalong girlfriend, Jennifer. When Merlin electrocutes his brain during a science experiment, he discovers he has the ability to read minds. Merlin has some fun with his new power before reading the thoughts of a local judge, Judge Holmsby (Leon Ames) who is seemingly plotting to murder someone.

In the second half, Merlin experiments with hypnosis and tangles with the campus bully, played by Norman Grabowski. Judge Holmsby, who was revealed to be a fiction writer and not a criminal at all, asks Merlin to help him with his upcoming crime novel. In order to prove that someone would be able to break his moral code if placed under hypnosis, the judge has Merlin hypnotize him. Under post-hypnotic suggestion, Judge Holmsby steals Stanley the chimp from the school science lab. When Merlin is caught returning Stanley in the middle of the night, he gets the blame for stealing him in the first place. It all gets worked out in the end.

Annette sings the theme song over the half-cool, half-creepy animated title sequence. Two different version of the theme song are available on her “Muscle Beach Party” soundtrack. Tom and Helen August (the screenwriters), were pseudonyms for Alfred Lewis Levitt and Helen Levitt, a husband and wife writing team that was blacklisted in the fifties.

Followed by “The Monkey’s Uncle”.