alternate titles: “The Maid and the Martian” 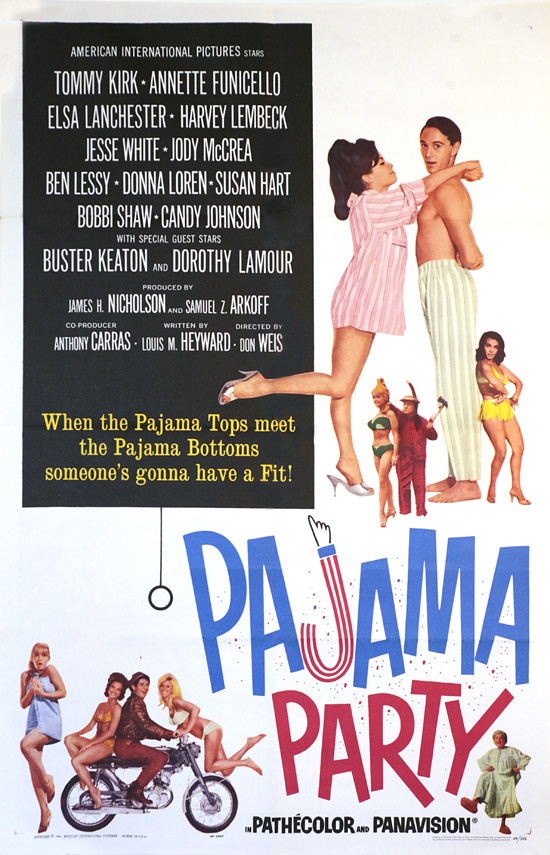 AIP’s first offshoot of their beach movie series is a thoroughly enjoyable one. Instead of living on the beach, the kids live in a mansion owned by a wealthy eccentric lady, affectionately called Aunt Wendy (Elsa Lanchester). The kids spend their carefree days twisting by the pool and going to the beach… to play volleyball though, not to surf.

Planet Mars, worried that Earth will someday be in the hands of sixties’ teenagers, sends bumbling agent Go-Go (Tommy Kirk) down to pave the way for a Martian invasion. Dressed in a doorman’s uniform and jet pack, Go-Go lands at the mansion, where Aunt Wendy renames him George. Immediately he starts telling people that he’s an invader from the red planet… so much for his secret mission. When George meets the stunning Connie (Annette), it’s love at first sight, although she just thinks he’s a “kook”.

King of the Con Men, J. Sinister Hulk (Jesse White), wants to get his hands on the cash Aunt Wendy keeps hidden in her mansion. After several unsuccessful attempts to get to the money through Aunt Wendy’s nephew Big Lunk (Jody McCrea), Hulk decides to throw a pajama party at the mansion next door. While everyone’s at the party, Hulk and accomplices search Aunt Wendy’s mansion for her money. Fleegle (Ben Lessy), Hulk’s main henchman, is given the task of finding some “typical, clean-cut American” youths to pass off as Hulk’s nieces and nephews. He screws up big when he enlists Eric Von Zipper and his gang. Even in this alternate “Beach Party” universe, Von Zipper hates the beach kids, and so a goofy fight breaks out when the Ratz and Mice show up to the pajama party.

When Connie finally falls in love with George, George decides he’ll no longer take part in the Martian invasion. Instead of setting up the device that will receive the Martian army, George sets the device to transmit J. Sinister Hulk and company to Mars.

“Pajama Party” was semi-remade as “Mars Needs Women” three years later. Tommy Kirk also starred in that remake. The original title of “Pajama Party” was “The Maid And the Martian” but was changed to cash-in on the success of the beach movies. Followed by “Beach Blanket Bingo”