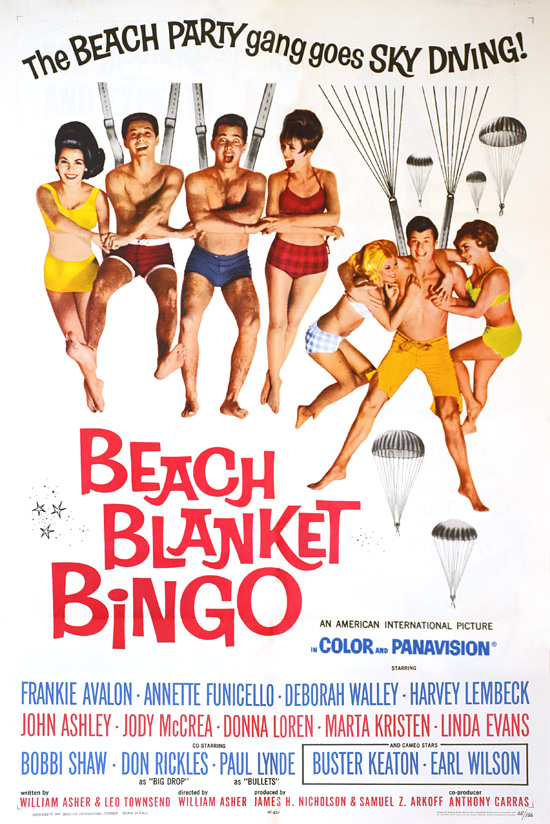 In the fifth installment of the AIP “Beach Party” series, the gang unwittingly takes part in a publicity stunt by rescuing a girl who has parachuted into the ocean. The girl turns out to be pop-singer Sugar Kane (Linda Evans), who has just released an album about skydiving, entitled “Come Fall With Me”. Sugar’s manager, Bullets (Paul Lynde), is on the beach, ready to take pictures for the newspaper of the brave surfers saving the poor girl. The beach kids become instantly enthralled in skydiving and enroll in classes at “Big Drop’s Skydiving School”, taught by bickering couple Steve and Bonnie (real-life husband and wife (John Ashley and Deborah Walley... Big Drop is played by Don Rickles). Bonnie and Steve turn out to be a really fun couple – Steve is extremely jealous and Bonnie loves making him that way. Frankie and Dee Dee become pawns in their mind games. Bad news for Frankie, who’s afraid Steve will cause him to die in a skydiving “accident”.

Bonehead (Jody McCrea. His character’s name was changed from Deadhead) doesn’t want to “jump outta no airplane” and stays behind to surf. He wipes out and is dragged to shore by a nearby mermaid (Marta Kristen, Judy Robinson from “Lost in Space”). Bonehead becomes obsessed with the mermaid and the gang tries to snap him out of it by fixing him up with Sugar.

Eric Von Zipper shows up and develops a crush on Sugar. When he finds out she’s going to make a new album with the surfers, he and the Ratz kidnap her. Sugar, thinking it’s another publicity stunt, goes along with the kidnapping. Von Zipper takes her to the pool hall where she’s kidnapped a second time by pool hall patron, South Dakota Slim (Timothy Carey). Sugar gets tied to a log in a saw mill by Slim, but is saved by Frankie, who heroically crashes in through the skylight. Poor Von Zipper gets buzz-sawed in half but is back in one piece in “How to Stuff A Wild Bikini”.