alternate titles: “How to Fill A Wild Bikini” (British Title) 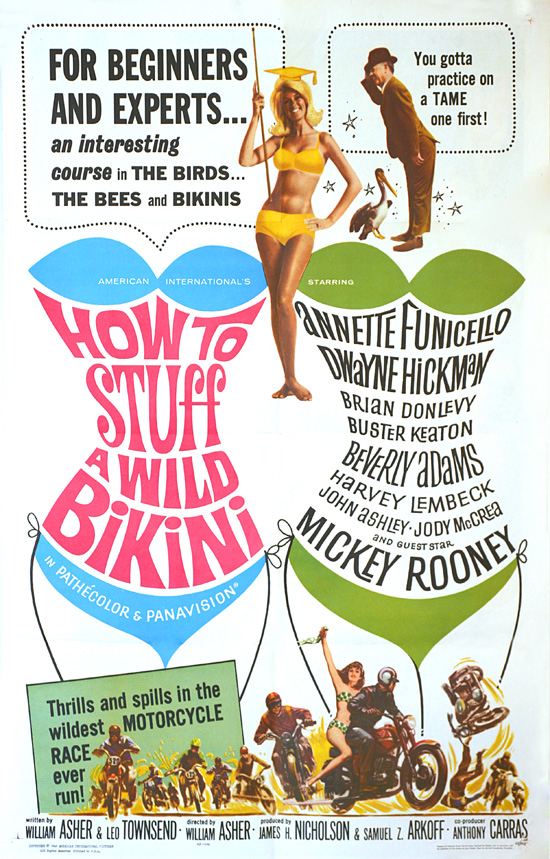 Frankie, in the Naval Reserves, is stationed on the lovely tropical island of Goona Goona and spends his days relaxing under a palm tree and cuddling with a beautiful native girl (Irene Tsu). Frankie starts to get nervous that back home in Malibu, Dee Dee will be as unfaithful as he is and consults the local witch doctor, Bwana (Buster Keaton). Bwana conjures up Cassandra (Beverly Adams), a decoy girl so tempting none of the other boys on the beach will pay any attention to Dee Dee. Cassandra’s mission is a success until clean-cut motorcyclist Ricky (Dwayne Hickman) shows up and sets his sights on Dee Dee. She rejects Ricky’s advances at first, but starts slipping by the end of the movie.

Ad-man Peachy Keane (Mickey Rooney), Ricky’s boss, is looking for the “girl next door” to accompany Ricky on a cross country tour promoting Bikini Bikes and improving the image of the motorcycle rider. Peachy instantly wants to sign Cassandra, but hits a snag when it’s revealed she’s an incredible clutz around the opposite sex. Along comes Eric Von Zipper, whom Cassandra feels completely comfortable and not at all clumsy with. When Peachy can’t figure out whether to use Ricky and Dee Dee or Von Zipper and Cassandra on the promotional tour, he enrolls the couples in a cross-country motorcycle race – winner gets the tour. The Ratz and Mice are there to help their boss cheat. Even though Von Zipper springs all his own traps, he actually wins the race… until he’s disqualified. Dee Dee scares Ricky off when she starts giving him the “let’s get married” talk usually reserved for Frankie. Frankie gets whisked back to Malibu with the help of Bwana’s daughter (Elizabeth Montgomery, the director’s wife in a surprise cameo) and the happy couple are reunited.

This was the last real AIP Frankie and Annette beach movie. During filming Annette was pregnant and is never shown in a bathing suit. Frankie had other projects like the awful “Sergeant Deadhead” (which is advertised at the end of the movie and opened a month later) and appears for only ten minutes or so. The music in “How to Stuff A Wild Bikini”, with the exception of a couple songs, is the worst of any beach movie, ever. Instead of a rock-n-roll song with a solo singer, everyone on-screen takes part in show-tune-like sing-alongs. Von Zipper and the Ratz are even given TWO songs… and one of the them is the same song they sang in “Beach Blanket Bingo”.

When “How to Stuff A Wild Bikini” was released in England, the title was changed to “How to Fill A Wild Bikini” because the word “stuff” has quite a different connotation over there. Followed by “Ghost in the Invisible Bikini”