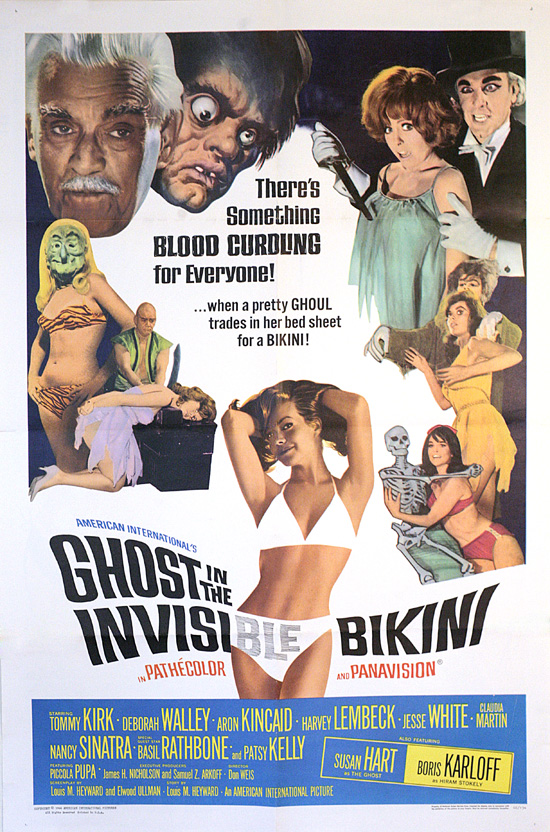 AIP’s seventh beach movie was sans Frankie, Annette or the beach. This attempt to revitalize the struggling series was the most expensive to make, and the least profitable.

Recently deceased con-man millionaire Hiram Stokely (Boris Karloff) is informed by a sexy ghost (Susan Hart in an invisible bikini and blonde wig) that in order to get into heaven, he’ll have to perform a good deed. Stokely’s fortune has been left to relatives of people he cheated when he was alive: Chuck Philips, Lili Morton and Myrtle Forbush (Tommy Kirk, Deborah Walley, and Patsy Kelly). Worried that his crooked attorney, Reginald Ripper (Basil Rathbone), will try and keep the fortune for himself, Stokely dispatches the ghost (in the invisible bikini) to make sure his heirs get their money and that no harm comes to them.

Ripper hires the services of J. Sinister Hulk (Jesse White reprising his role from “Pajama Party” to get rid of Stokely’s heirs. Everyone meets up at the big spooky Stokely Estate, where Stokely’s will is to be read at the stroke of midnight. Things get a little livelier when a bus carrying Myrtle’s nephew, Bobby (Aron Kincaid), his girlfriend, Vicki (Nancy Sinatra), The Bobby Fuller Four, and two dozen screaming teenagers pulls up in front of the mansion. The teens turn the backyard into a crazy party until a thunderstorm forces them inside.

At the will reading, we learn that Hiram Stokely didn’t keep a bank account and that all his money is hidden in the house somewhere. Eric Von Zipper, who’s out causing trouble with the Ratz and Mice, learn of the money after eavesdropping on Ripper and begin tearing the house apart looking for it. Hulk and his associates, Princess Yolanda (Bobbi Shaw) and Chief Chicken Feather (Benny Rubin), dress up in monster costumes and chase the teenagers and bikers around the mansion. What this is supposed to accomplish I don’t know. After a big dumb fight in Stokely’s “Chamber of Horrors”, where Lili is tied to a log and nearly sawed in half (sound familiar?), the gang finds the lost fortune. Ripper tries to steal the money but is blown up when the ghost (in the invisible bikini) causes his blunderbuss to backfire.