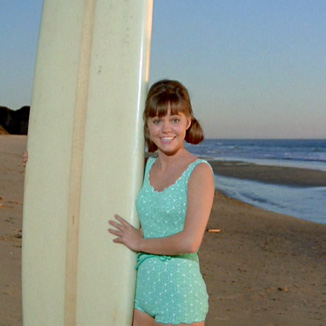 In this first episode of the “Gidget” TV series we are introduced to Sally Field as Gidget. Her mother has died and she lives with her father (played by Don Porter) who is a professor at UCLA. Although Moondoggie (played here by Stephen Mines) is in this episode, he’s off to Princeton soon and therefore out of the picture. Gidget’s overprotective sister, Anne (Betty Connor), and her husband, John (Pete Deuel), are always visiting the Lawrence house, butting in and causing trouble for Gidget and her father.

Gidget feels that her life is getting dull and decides to spice it up by embellishing her diary entries with tales of wild romance. When her nosy sister finds the diary she can’t help but read it. Anne is shocked by the content and brings the journal straight to Professor Lawrence, who is now forced to confront Gidget about it. Gidget is crushed that her father may have read the diary, buries her face in her pillow, and turns on the waterworks. After Dad’s assurance that it wasn’t he who was snooping, it doesn’t take long for Gidget to figure out what really happened.

A longer version of this episode, that has a more satisfying conclusion and served as the pilot, appears on the DVD collection.

Pete Deuel (billed as Peter E. Deuel)… Larry (Larry? It should be John)

Assistant to the Producer… Norman Kurland