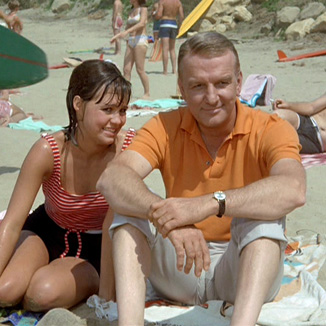 Gidget takes Professor Lawrence to the beach to show him why she spends all of her time there. He quickly loses interest in Gidget’s activities when he meets a woman his own age to chat with. The two hit it off and make a dinner date for later that evening. With her father gone, Gidget isn’t sure what to do with herself, so she goes to bed early. When she wakes up it’s only midnight and her dad still isn’t home. Gidget becomes so anxious that something terrible has happened to her father that she calls the police to go look for him. When Professor Lawrence gets escorted home by the police, he is not amused. Gidget cries her eyes out and makes him feel guilty about not calling.