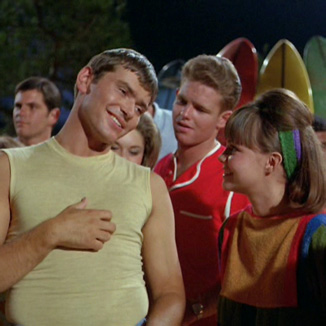 In the previous episode, Gidget and Moondoggie came to an understanding that the two of them would see other people while Moondoggie was away at school. Gidget’s boyfriends get tired of hearing about the “implicit faith and trust” she has in Moondoggie so much that Gidget finds herself dateless for the big upcoming luau. In desperation, Gidget asks her brother-in-law, John, to accompany her. John, who is studying to be a psychologist, accepts Gidget’s invitation in the hopes of doing some field research on modern teenagers. Anne, Gidget’s older sister, thinks it’s a great idea until she meets some of Gidget’s sexy friends. Things begin to fall apart when Anne disguises herself and crashes the luau to rescue her husband. To further embarass Gidget, her father shows up at the luau to stop Anne and is mistaken for a peeping tom.