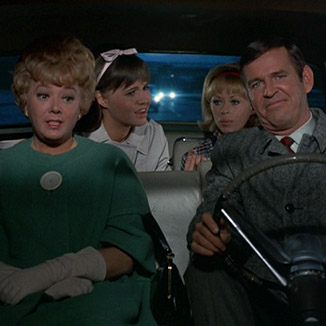 Gidget is commondeered by her friend Shirley to go with her and her parents to buy a car in Pasadena. Gidget, who is wearing her pajamas for the entirity of the episode, convinces Shirley’s father, who is a bundle of nerves and anger, to pull off the freeway so she can phone her father. The evening goes horribly wrong when Shirley’s father gets them lost and Gidget isn’t able to reach her father to tell him where she is. Jeff Donnell, who plays Shirley’s mother, played Gidget’s mother in “Gidget Goes Hawaiian”.