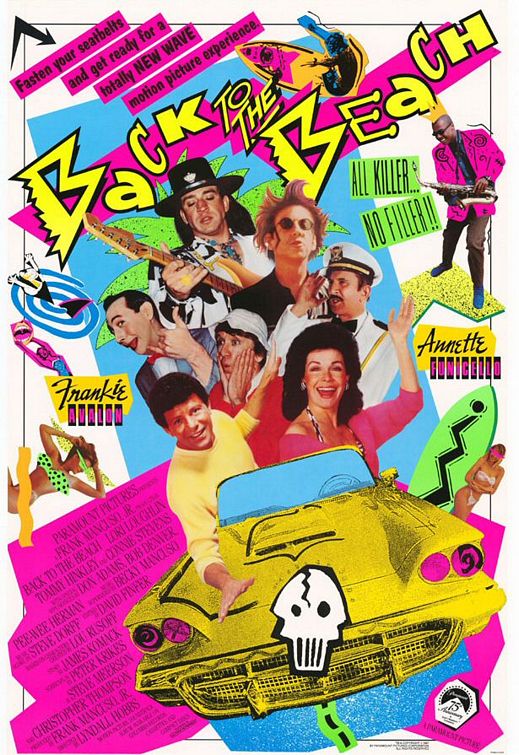 Twenty-two years after “How to Stuff A Wild Bikini”, Frankie and Annette get together for one last beach movie. The result is one of the best movies to come out of the ’80s.

Frankie and Annette have gotten married, moved to Ohio, and had two kids. Annette has become overly cheerful, and spends her days buying Skippy Peanut Butter. Frankie owns a used Ford dealership and has turned into the adult he was afraid of becoming when he was a teenager. Demian Slade is hilarious as their punk teenager son Bobby, who is mortified by his parents.

When the stress of everyday life finally gets to Frankie, he decides to take the family to Hawaii for a well-deserved vacation. The vacation gets sidetracked when they have a layover in Los Angeles and decide to make a surprise visit to their daughter, Sandi (Lori Loughlin), who has moved to L.A. and is secretly living with her fiancee, Michael (Tommy Hinkley). Michael jumps out of the window into the ocean when Sandi’s parents show up at their door, but leaves clues to his existence behind that are discovered by her overprotective father. Frankie becomes obsessed with finding the guy sleeping with his daughter until he runs into his old girlfriend Connie (Connie Stevens). Annette’s old jealous streak returns and the couple have a major fight, missing their plane to Hawaii. Sandi and Michael also get into a fight when Michael learns he can’t return to their apartment until her parents leave.

Michael runs into a drunken Frankie, takes him to “sleep it off” at his friend’s place, and saves him from a massive hangover the next morning. The two become fast friends trying to win back their women. They trick the harbor master (Don Adams) into letting them throw a big beach party as a signal to Annette and Sandi that it’s time to make up.

The party is crashed by the motley gang of surf-punks that Bobby has been hanging around, and it’s decided that the beach isn’t big enough for them all. A surf contest between Michael and Zed (Joe Holland), the surf-punk leader is scheduled for the next day to determine who will control the beach. Frankie, who hasn’t been on a board since a surfing accident twenty years earlier put him into a coma, has to step up and take Michael’s place in the surf-off after Michael’s foot is crushed by a conga drum. When the “Humonga Cowabunga from Down-Unda”, the same annual wave that caused Frankie’s accident, returns, Frankie re-learns to surf quickly, wins the contest and gains the respect of his son, the surf-punks and everyone else on the beach.

A sequel entitled “Surfing Safari” was planned but never made.